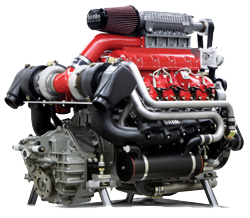 Marine Head Gaskets vs. Automotive. There is no difference!

There is some truth to that statement up to a point. Have you ever been 30 miles out from the shoreline and you had engine trouble with your boat engine? Now go ahead and tell me to just call AAA! Other than that, when comparing marine head gaskets vs. automotive, there really is no difference.

Anyone who’s owned a boat, particularly a salt water boat of any size knows that salt water is quite a hostile environment (on everything, not just the engine). There are certain things we can do when we’re working on a boat engine, things we can do to not only increase the life expectancy of the engine but cut down on future expense by preventing breakdowns from happening in the first place.

There is no such thing as a light load on a marine engine because it is working hard from the time you first leave the marina until you’re back in your slip and finished for the day. We can put it into perspective for you by comparing it to towing a loaded trailer with your car or truck full time. I used to tow a car trailer back when I drag raced as a hobby. With the race car inside of the trailer, it only weighed 5200 lbs. My fuel mileage on my 2006 F250 with a Power Stroker engine went from 16 MPG to 9 at 65 MPH with a power chip added to the Ford’s on-board computer. The last boat I owned was a 33’ Chris Craft with twin 350 Chevrolet V-8 engines in it, a real power house but gas hungry to say the least. It burned 14 gallons per hour @ 24 MPH on the water. I’ll save you the trouble of doing the math to equate this to miles per gallon: 1.714 MPG! I never tried towing anything such as skiers behind the boat because it might have gotten worse.

Using the 350 Chevrolet engine previously mentioned from my boat, I researched on E-Bay this AM and found a complete set of new stock valves for $48.99 with free shipping. That, my friend is a real bargain, I’m not sure what province in China they came from but I can buy a complete set Chinese valves for a Chevrolet engine for only $27.40 a set. We actually used some of these “whatta deal” valves one time while trying to save the customer $$$$$ and wound up having a number of them fail. You can bet we immediately stopped using those poor quality valves.

Stainless steel is as good for the inside (such as engine parts) of a boat as well as on the outside. Here is a technical bulletin for you to read from AERA (Automotive Engine Rebuilders Association) on “tuliped valves”. Admittedly it’s a little technical but the bottom line is inside temperatures (combustion temperatures) in a boat engine are dramatically higher than that of a car or light truck.

If I’m rebuilding my 350 marine engine, I definitely would prefer spending $80 more for a good set of stainless steel valves. The same idea goes for valve seats, it doesn’t cost that much more for for a set of good valve seats and you will ALWAYS see a much better result in terms of engine longevity.

Even though we don’t rebuild engines here at Southeast Cylinder Head, there are other money saving tips we can share with you, not all of which are extra, that we’ll be happy to discuss with you.

Get A Free Quote For Marine Head Rebuilds!