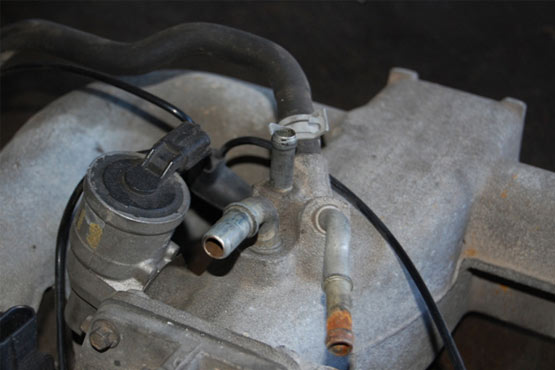 How a small mistake cost this shop owner 10’s of hours and hundreds of dollars!

Since this happened this week, and it has happened probably half a dozen times before, I thought I’d mention it.

Last month, a shop outside Orlando sent us a cylinder head saying it is cracked. After pressure testing it, I called saying “good news, the heads not cracked!” In retrospect I should have asked more questions. By the same token, the owner of the shop could have volunteered more information.

Day before yesterday, the shop owner called asking if I could help him. This same Escort has water in three cylinders and can I sell the head for him. Keep in mind, one of his mechanics has spent who knows how many hours on the car. IT GETS WORSE!

Finally I speak to the mechanic. Here is the story:

At the top of this article is a picture of the intake manifold from a 2000 Focus but all these manifolds are similar from 1997 to 2005 including Escort, Focus and Tracer with a 2.0 SOHC engine, engine VIN Code “P”. As you can see there are 4 connections. The trick is 2 are water and 2 are vacuum. Put a water hose where a vacuum line should be, water in the cylinders.

The fitting with the hose on it and the fitting across from it with the rust on it are coolant fittings. The others to the left of those are vacuum lines.

Just think of all that time, all that money for such a simple mistake!