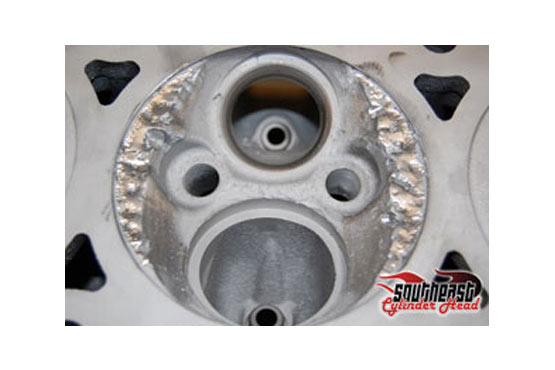 There are 3 engine families that have a well-known problem: the intake seats fall out which naturally causes internal engine damage. Unfortunately for the Chrysler/Dodge owners, Chrysler Corp. has 2 of them:  3.7 and 4.7 SOHC engines as well as the 5.7 and 6.1 Hemi engines. In addition (according to a local Chrysler parts manager) the “2nd generation” 3.6 liter V-6’s have the same issues as those above. Ford owns the third, SOHC 2.0 liter Focus and Escorts.

Replace All The Intake Seats on Your Chrysler, Dodge or Jeep

As always, we recommend replacing all the intake seats on these engines when they come to our shop. And it isn’t because we want the additional money which is only an extra $75 or so, but because odds are that another seat will come out. 4 to 5 years ago, we would only do only the ones that came out. Bit us in the ass, no more. The car lots are the worst, ‘all I want to do is get it off the lot’.

Here is a picture of the damage done by an intake seat coming out of a 5.7 Hemi: 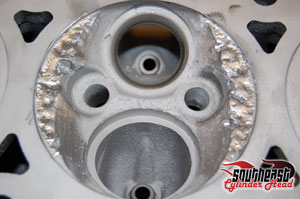 We removed all of the pieces of the broken seat and smoothed out the rough areas to eliminate peaks and possible hot spots (detonation). In this case we didn’t recommend welding the damage up because the damage wasn’t severe enough. What you can’t tell from the picture above is that the damaged area is actually recessed .035” below the surface of the cylinder head. If it had been welded we would then have to set it up in a Bridgeport machine and re-cut the area. In more severe cases we are forced to do it because of the extent of the damage done by the failed intake seat.

It is easier to see the normal recess on the other cylinders from the same engine as shown in the picture shown below. Take note of the undamaged areas and compare them to the picture above where the failed intake seat damaged the cylinder head. 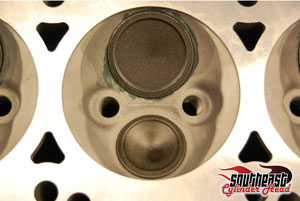 As I mentioned earlier, we recommend replacing all the intake seats not just the one that failed to prevent future failures. Here’s what happened to a Hemi engine just 4108 miles after we repaired the above cylinder head a few years ago for a customer who declined having the other 7 seats replaced:

As always, call us if you need us.